Malmaison Liverpool is an 11-story hotel overlooking the famous Liverpool Princess Docks. The hotel boasts not only a large selection of rooms ranging from standard twins to extravagant suites but a sophisticated bar and restaurant. The hotel opened in 2007, it was Malmaison’s first purpose-built hotel and was inspired by Manhattan structures. The city living and industrial feel of the architecture transpired into the hotel’s interior design scheme and in particular, its guest bedrooms. Having previously worked with Malmaison on several projects at various UK locations, Furnotel was naturally keen to help.

Furnotel was contacted by Malmaison to supply, manufacture and install hotel bedroom casegoods for their Liverpool location as part of a site-wide refurbishment. The hotel’s signature interior design scheme was still maintained throughout the refurbishment but just required refreshing. Malmaison has a very distinctive décor theme that is synonymous with their brand which they wanted to uphold during this refurbishment.

The hotel was refurbished one floor at a time to avoid closure and minimal disruption to its hotel guests. Once they had finished with decoration and other aspects of the interior refurbishment, the floor was then handed over to the Furnotel casegoods installation team the following week.

The hotel’s designer worked alongside Furnotel’s own Technical Design team to specify and create the ideal pieces of contract furniture for this project. This included headboards, desks and media wall units for this much respected hotel chain that dares to be different in its room designs.

Furnotel’s Technical Design team were contracted to design, produce and install a number of bedroom casegoods for the well-known hotel. The boutique hotel aesthetics resonate throughout many, if not all of Malmaison’s hotels. Liverpool was no different and was a design style that they wished to keep.

As the hotel was getting its interior design scheme revitalized and brought right up to date, the decoration of the hotel bedrooms also changed. The previous colour scheme consisted of moody fuchsia pinks and black. The new scheme moved away from the very deep dark colours and lightened the rooms up with crisp silvers and pale greys. It certainly still retained its boutique atmosphere but also featured quirky feature walls of graffitied brick walls or contemporary geometric prints.

Due to this change in décor, Malmaison’s nominated designers provided a brief that closely resembled their new theme. They wanted their casegoods to have dark walnut stain and rustic steel metallics. The industrial feel of these casegoods was a juxtaposition of the luxurious, soft feel of the velvet divan and headboard and the feature wallcoverings behind.

An element of architectural design was needed for this project, therefore, a detailed survey took place in order to take accurate site-specific measurements of the rooms to ensure that the bedroom casegoods fit snugly in place, coupled with assessing delivery access and whether the furniture could be delivered fully assembled or needed to be assembled on site. Following this survey, Furnotel presented their findings to Malmaison’s design team and production commenced. The casegoods chosen had a very boutique, industrial colour scheme and theme, in keeping with the hotel’s latest design style.

A clear lacquered steel frame with visible weld joints to support the industrial design was used for the integrated TV and shelf unit which was specified for the larger rooms that had sufficient footprint to accept it. Due to measurements differing so much between bedrooms these items were made bespoke. In most rooms, the wall units were positioned above the desk and served as extra shelving space for hotel guests.

The desks were produced in a smoke grey high-pressure laminate with a character oak grain because of its hard wearing, easily cleanable surfaces which is ideal for the hotel environment. In addition to this, selected hotel guest rooms were provided with free-standing TV units or TV tables. Both of these were specified in dark, laminate with steel lacquered exposed metal work. 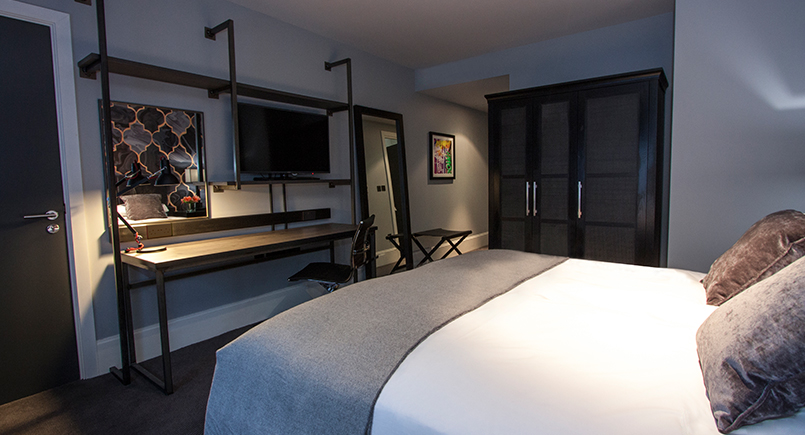 Sumptuous velvet headboards and bed bases provided the juxtaposition between the raw industrial pieces and the luxurious fabrics.  The beautifully upholstered headboards were specified in an array of sizes depending on their guest room specifics and in different styles. Traditional rectangular three-panel headboards were used in addition to tall fluted scroll top headboards in larger, more superior rooms. These headboards and beds can also be seen in Malmaison Reading and Malmaison Leeds locations, both of which were also furnished by Furnotel.

To accompany the desk which is not only ideal as a dressing table but as a workstation for business travellers, Furnotel introduced a power bar. This was designed to neatly conceal all electrical wires and act as an accessible power outlet. Designed in a matching dark steel grey, it coordinated with the design scheme perfectly.

The installation of casegoods at Malmaison Hotel in Liverpool was carried out in 10 phases over 48 weeks.

The hotel remained opening during the refurbishment and installation period to reduce the amount of disruption to employees and guests. Our installation team essentially worked to the client’s schedule, gaining access to the rooms once they had been refurbished. This meant there was little room for delay or error as Furnotel was allocated one week to work on each floor before moving to the next.

The project called upon Furnotel’s technical product design skills and production of robust contract casegoods that will stand the test of time. 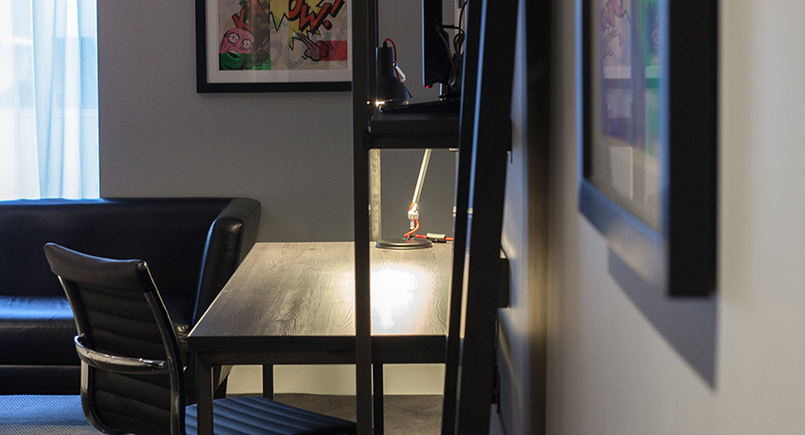