The historic four-star Avon Gorge Hotel sits on the edge of the River Avon overlooking Brunel’s famous Clifton Suspension Bridge. The Victorian building has been there since 1898 and was used a spa until 1914 with many famous visitors and military personnel staying within.

Acquired hotels by the Malmaison Hotel du Vin (HdV) brand in 2015 along with three other properties, it’s opening was highly anticipated by locals but first required significant modernization within the guest rooms, restaurant, bar and all circulation areas

Furnotel were delighted to partner with Hotel du Vin and their nominated Interior Designers, Dexter Moren Associates in London, to manufacture bespoke casegoods for the newly refurbished landmark hotel.

Due to the hotel undergoing a larger scale refurbishment not just in the guest rooms, Furnotel’s team conducted a thorough survey of the hotel before each phase in order to identify potential issues and put in place a contingency plan. 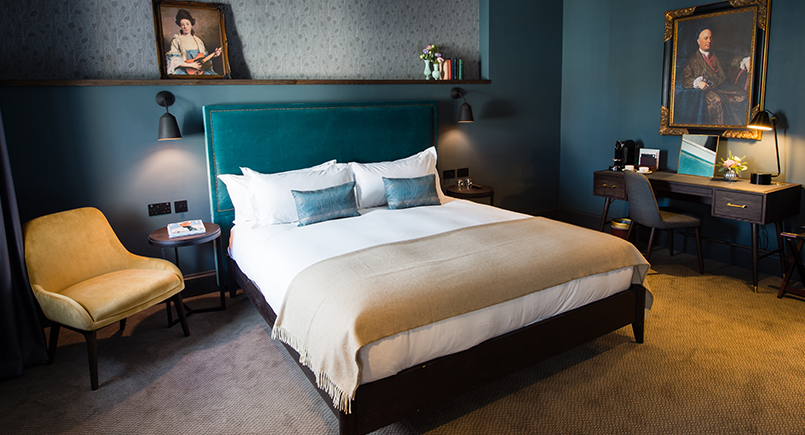 The brief Hotel du Vin had provided for Furnotel was one that specified a package of contract quality casegoods that were designed with corporate but boutique characteristics. The casegoods were to have a contemporary design while being classic enough to be rolled out to other properties in the estate in the future. A colour scheme of deep reds, blues and pops of bright teals were specified and bedside units, desks, wardrobes, bespoke headboards and bedrooms were to be manufactured in dark walnut. Accents of bright colours and gold details were to be featured throughout the rooms casegoods.

The hotel’s guest bedrooms had been refurbished to a high standard and featured deep sumptuous shades of grey, teal and aubergine, lush carpets and well-dressed large bay windows. The dark walnut bedframes with turned tapered feet were accompanied by the bespoke hotel headboards manufactured by Furnotel. The headboards were upholstered in plush velvets varying between flamingo red, teal, dusky rose pink, duck egg and soft green from Clarke and Clarke’s Alvar collection. These rich cotton like velvets were treated to crib 5 standard and once upholstered to the headboards, a perimeter of pewter studs were added to complete the boutique look.

The hotel bedrooms also featured soft close wardrobes with a contrasting interior colour which complimented the wider bedroom décor. The robust desks featured two deep drawers either side with brushed antique brass drawer handles and turned tapered legs that were made with brushed brass slipper cups which finished the design beautifully. 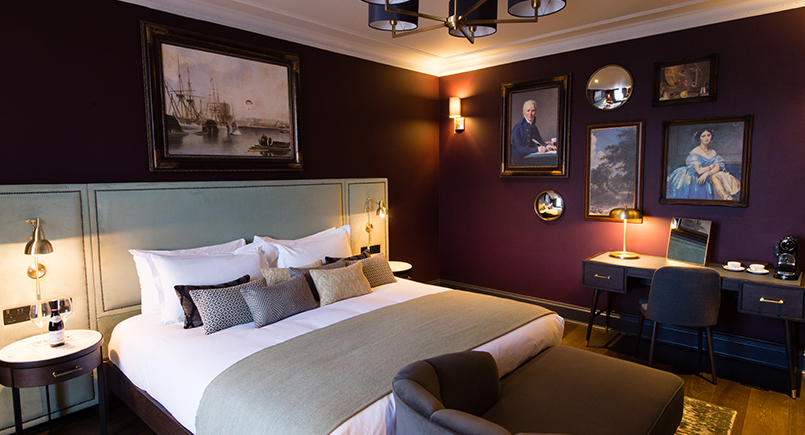 Furnotel’s installation team worked in partnership with the clients building contractor to ensure that all rooms were handed back on schedule and to the highest quality. The team also had to coordinate their schedule with other trades working on site to ensure everyone was aware of each other’s itinerary. Due to the client’s challenging timeframe, there were long working hours involved in each phase. The installation was divided into four phases and completed over a 24-week schedule.

The headboards and bed frames, due to their size, were delivered in modules as the Furnotel team had identified access issues during the initial site survey. Therefore, the headboards were assembled on arrival to site without any issues arising. Casegoods such as the wardrobes were required to be assembled on site due to the impracticality of manoeuvring such large pieces of furniture during transports and once on site.